Coding is another language. It is a way of telling a computer what to do, say and create. Earlier in the year we explored basic HTML coding in google site. I really enjoyed this coding and at the time became to question more and more how I could make this a part of my classroom program.

Hour of Code
Today we explored the hour of code a world wide movement to promote the learning of coding. Each of the sessions uses simple building builds and you code the program to do certain actions. 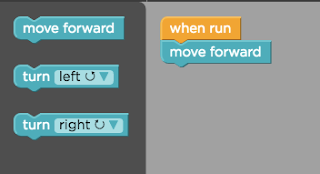 Behind each block is the Java coding script which you can look at. You can also choose to code in this Java script.

Today I coded with MineCraft on the hour of code using the blocks. It took me a while to get use to it but once I did it was lots of fun.

I also choose to do try doing using Java script this was a whole new challenge as if the script isn't right it won't work. I do however find that once I was use to it coding in script was just as straight forward in this program as coding with the blocks, this was help by the drop downs when writing.
Here is an example or my Java script writing to complete tasks.

I am excited to do more coding and introduce coding to my learners as I believe it is a great skill and can be intergraded with maths and literacy.

Posted by Clarelle Carruthers at 14:39